“The Brood-parasitic hosts for Asian Koels (Eudynamys scolopaceus malayanus) (below, juvenile) have always puzzled me for my region. “Wells 1999 states ‘House Crow and Large-billed Crows are the only proven fosterers”. HBW 2017 on brood-parasitic hosts states “around Bangkok, in Thailand, formerly used C. macrorhynchos, but has now switched to Acridotheres tristis and White-vented Myna (A. grandis); in Peninsular Malaysia lays in nests of C. macrorhynchos.’

“In February 2010 when posting on the Asian Koel breeding on OBI, I made a comment: ‘Asian Koels are supposed to brood parasite the Jungle/Large-billed and House Crow in Southern Thailand and Malaysian Peninsula, and Koels are stated to have shifted host from crows to Mynas in Thailand (Payne 2005). Koels have only begun to appear in any number in my city in 1991. Since then they have become very common. The House Crow (Corvus splendens) on the other hand has not yet made it presence and Jungle Crow/Large-billed Crows (Corvus macrorhynchos) occur in very small numbers in the city.’ “I had always suspected that the Common Myna (Acridotheres tristis tristis) was being used by the koels and are possibly the main brood-parasitic hosts. Today I witnessed a pair of Common Mynas feed a juvenile male Asian Koel in my neighbourhood (above, with host). I unfortunately do not have any feeding images as the mynas are very reluctant to feed when I am near and often move the juvenile koel to a new branch or out of sight just when feeding. But after 45 minutes of observation there is no doubt that they are the brood-parasitic hosts.

“There is a good image and write-up by Phukan 2010 of similar behaviour with Common Myna in India. In the ‘Cuckoos of the World’ 2012 brood-parasitic hosts for the Thai-Malay Peninsula is recorded as ‘House Crow and Common Myna’.

“Some additional observations:
1. Wells 1999 and HBW 2017 both state that breeding occurs “Feb–Apr in Malaysia”. This observation in July suggests a wider breeding period. 2. I observed the juvenile male Koel self-feeding on Ficus benjamina, fruit, possibly as my presence limited feeds from brood-parasitic hosts (above). Most of the hosts feeds were animal prey. 3. I recorded the ‘begging’ calls of the juvenile bird and will post a recording (above, showing begging behaviour).

4. I have an odd observation that I have left to the end. When I first was alerted to the juvenile Koel’s presence (due the calls) I spotted 4 adult birds surround the juvenile. Three were Common Mynas (Acridotheres tristis tristis) and one a Jungle Myna (Acridotheres fuscus torquatus ). I initially dismissed this as a coincidence as they all flew away at my approach. But over the next 45 minutes the same four birds came to be ‘in-attendance’ of the juvenile Koel a number of times. I only observed 2 Common Mynas feeding but the other Common Myna and the Jungle Myna were present (very close) and not in conflict with the main two adult Common Mynas. I have difficulty understanding this as it suggests ‘helpers’ but cross species?”

Postscript:
Clive Mann commented:‬
“…These are interesting observations, the last really fascinating. It is probable that one species of myna was the original host, and the other species was attracted by begging calls. This has happened in other species of cuckoos, and also in non brood-parasitic species.”

Amar replied:
“The other species was attracted by begging calls. I had surmised as such but really good to get your views. There must be some component or element to the calls that ‘tugs’ at the heart of these mynas (even of another species). Fascinating. Must learn to evaluate and explore calls better.” 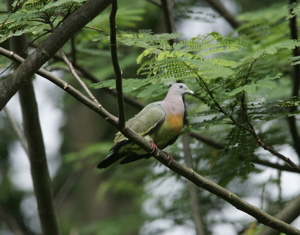 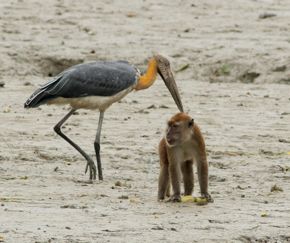