“The mountain village of Wulai – shrouded in an early, spring fog and intermittent rains, had me to take cover at a spa resort, beside the Tonghou River. “Having looked around and thought of no predatory threat, this blue jewel disappeared into gutter eaves of the roof (above, below). “This 30-32cm bird with habitat preference for damp, dark ravines and fast flowing streams was observed with nesting material in its black beak (below). “Nesting window period of this endemic bird species is generally between April and July. (Ref: Complete Guide to Birds in Taiwan by Jin-Yuan Wang)

“Sighting of this bird was noted to be 15 March, 2016. Breeding season came early for Taiwan Whistling Thrush in Wulai. “A year later, I revisited this hot spring village and was pleasantly surprised; these endemic birds with appetite for insects, crustaceans, small amphi-reptilians and earthworms were easily encountered along the rocky edges of the shallow Tonghou River (above).

“Ahead of time set on my alarm clock, sleep was interrupted by melodious chorus and whistling calls that sounded like screeching bicycle brakes. A Taiwan Whistling Thrush has flown up onto my balcony and ready to begin a new dawn.

“It was like a hired, local bird-guide appearing at 4.30am in the morning with body language…. ‘Are you ready?’

“Most of my observations were taken from the guesthouse’s long balcony with DGscope x30 and distance of no less than 20m. As such, many images are only of identification quality, lacking in clarity as subjects were taken from a great distance and aiming downwards onto the river. “A breeding pair was observed foraging and frolicking on rocky surface. Favourite perched spots often stained with white poo (above). “It was also observed; perched birds frequently flicked and fanned out their tails, shuffled and folded their wings at same time (above, below). “Under different lighting conditions, plumage colour of TWT varies from turquoise to deep purple and black. Where lighting permits, a headband of bright blue on its forehead and on bend of wing is highlighted. “Two profiles – including preening and feather maintenance presented here (above, below). “With red eyes and black beak, I could not dismiss but to provide a pictorial comparison of its endemic cousin across the ocean – Malayan Whistling Thrush (Myophonus robinsoni) of black eyes and bill of black tip and yellow below (below). “Do join me in Part 2 to read TWT indulge and forage in the course of a day at Tonghou River, in the mountain village of Wulai” 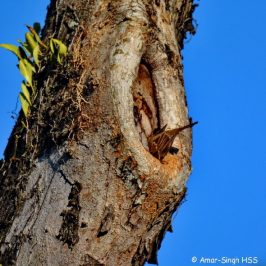 “I found the Eurasian Tree Sparrows (Passer montanus saturates) in Sandakan quite interesting in a...