“Writing birding trip reports for public viewing is never my forte. I deemed them rather boring, having to recall all those experiential journeys, that only I alone, to keep in good, private memory.

“It is in the logistical planning and creating blue prints of my personal travels; an Open University education waiting to be explored and acquisition of experiential knowledge that books simply don’t teach that makes them ever more fulfilling.

“It is this part of travel that keeps my passion for travel ticking. While they may just be a means – a play out to meet a destination, what shows or may show up from start to finish, complement those frills and thrills that make my life far from dull. “In early spring 2016, a day birding trip to a natural, hot spring and spa resort village of Wulai, near Taipei ROC was made. Following which, I pre-booked a two night stay for a late spring, birding trip year later (above). “Little Valley Cottage erected on solid, cliff edge of the Tonghou River must have been one of the earliest guesthouses ever built (above). “Wulai – known in Atayal aboriginal phrase for ‘boiling water’ attracts Taiwanese and foreign tourists alike for its famed, natural hot springs. Geographically, the mountainous village straddles on the highest ridge of Taipei basin, sandwiching between mountains, ranging from 500m to more than 1000m a.s.l. (above, below). “Late spring 2017 appeared to be in a lull and low season period. I found myself the only guest occupant. I was warmly received by an octogenarian couple – property owner for more than four decades. “One flight of steps below and first room on the right, DGscope and I were ushered into the best, family room of the property. Evidence of plumbing works of a bygone era, stared. Like their owners, still functioning but had seen better days. Upgraded, the spacious and clean room opened into a long balcony, overlooking evergreen, forested hill slopes (above). “From such vantage view —180 degrees, the sky and hill sloped forests can be appreciated from the left to the right and the wide Tonghou River flowing below (above, below). “One can only imagine what can be had, by simply sitting and observing the many possibilities bird life have to offer, along the Tonghou River. “At time of visiting, repair works were still on going (above). “Bald patches of forested hill slopes remain to this day – a cautious reminder to… remain alert, be wary and tread with respect and care whenever visiting natural disaster zones (above).

“It is also a stark reminder to greedy, commercial developers of environmental abuse, what wrath Mother Nature is capable of inflicting, to the once and small, beautiful piece of heaven on earth.

“Has this ‘boiling water’ mountain village boiled over and heading for the sunset……..?

“Do join Avian Writer beyond this introduction to read the many articles in ‘Birding Highlights of Taiwan 2017 series’ coming soon.

“Be delighted; be surprised by interesting behaviours of several bird specialists that live amongst the rocky edges, pebbled river floors and shallow waters of the meandering Tonghou River of Wulai. 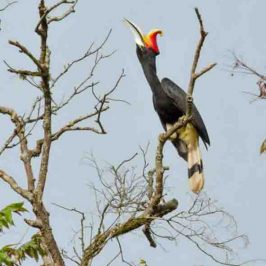 Maliau Basin Conservation Area on Borneo, affectionately known as “Sabah’s Lost World” is one of...