“Before I ‘virtual-transport’ readers to the ancient, walled city of ‘Everlasting Peace’, I think it is justifiable to learn a bit more of this lowland, endemic subspecies – Black Bulbul (Hypsipetes leucocephalus nigerrimus). “Here are three views of the bird species photographed in Taiwan ROC. Side view at top, under view at above and rear view at below. “Bird wears a shaggy crest and plumage almost all black except for its contrasting beak and feet of bright orangey-red, including its anus.

“Primary and secondary upper wings in comfort position display bands of silvery-grey edges on most of feathers (below).| “There are ten documented sub-species of Black Bulbul. Their presence spans from India east to southern China, including the Indochina region. There are few bulbul species in Taiwan ROC but most of each species is substantial in population numbers.

“Black Bulbuls (H. leucocephalus nigerrimus) are no exception. These common birds were observed in parks and gardens, open forests, forest edges and clearings during my several visits from 2015-2017. “These birds with broad, squarish, notched tails breed between April to June when (above, below). “Noisy at times, their tweeting songs and squeaky, braying calls are easily distinguishable. “Pair bonding is strong during daytime foraging as observed (above). “During field trips, Black Bulbuls (H. leucocephalus nigerrimus) were also found to roost in numbers at pre dawn hours. It suggested safety in numbers to be more assuring against predators by staying close together at night (above). “In comfort zones, they preened, displayed and yoga stretched (above, below). “A return visit to ancient city of Hengchun justifies their foraging presence in sharing abundance of Chinaberry with their distant cousin – Styan’s Bulbul (Pyconontus taivanus). “Here are some pictures that paint a thousand words. Spoilt for choice, branches of olive coloured, Chinaberry fruits dangled in profusion like masses of curtain beads (above, below). “For easy pickings, these endemic subspecies were observed foraging along walking paths and relishing fallen berries from an overnight rainfall (above).

“A lucky and rare, photographic opportunity was had when a Black Bulbul (H. leucocephalus nigerrimus), while having picked a large, succulent berry, another berry suddenly fell from above, teased and caressed the bird’s back before it rolled off. “It was as if to say, “Pick me! Pick me!” Sequential images are shown here (above, below). “Taiwan ROC – a small island of mere 13,974sq metres off South China Sea – capable of holding 15 endemic species and 66 endemic subspecies of birds is quite remarkable. (Ref: ‘Birdwatching in Taiwan by Wild Bird Society of Taipei’.) “Over the years, I have noticed the flight corridor of the Blue-crowned Hanging-parrot (Loriculus galgulus)... 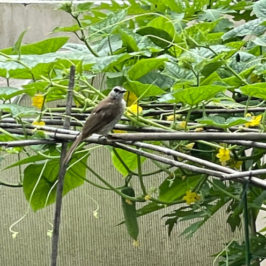 I came across a Yellow-vented Bulbul (Pycnonotus goiavier analis) swallowing the flower of the cucumber...