“Most literature supports insect and nectar feeding for this sunbird but I have observed fruit feeding more often than nectar feeding (insects are most common). In the past I have seen them feeding on the fruit of the Blue Mahang (Macaranga heynei, formerly known as M. javanica), small berries and also taking pieces of ficus fruit (Amar-Singh, 2010). “Today I saw both an adult male (above) and an adult female (Amar-Singh, 2010) feed on the small fruit of a tree. “The tree was full of many creepers but the fruit was coming from inflorescences from the stem of the tree. Post 2 is a poor image of the bird collecting fruit but better illustrates the fruit and flowers (no identification of tree as yet).” 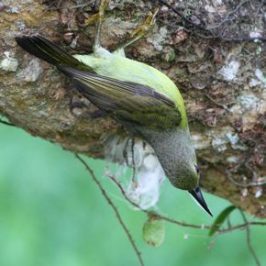 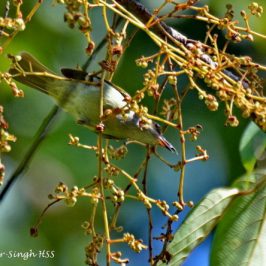 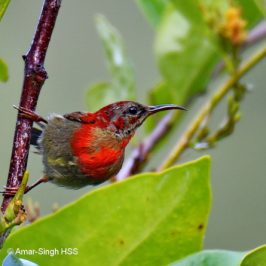