For a number of days in January 2017, photographers were thrilled when an exotic male Silver Pheasant (Lophura nycthemera) suddenly appeared at the Singapore Botanical Gardens. The strikingly contrasting white and bluish black plumage, scarlet wattle and crimson legs were enough to cause photographers to rushed to the site for their prize shots.

Around the left leg of this pheasant can be seen a ring (see above), indicating that it belongs to either Jurong Bird Park or a collector of exotic birds.

Jeremiah Loei‘s video of the pheasant foraging is shown above. A screen grab shown below shows the pheasant pecking at what suspiciously looks like baited food.

In February photographers encountered the female at the same location (below). By then the male was nowhere to be seen. The female bird is not as spectacular as the male and there were less photographers around. It was also hurt.

According to aviculturist Lee Chiu San: “You can get one [Silver Pheasant] from local pet shops if you place an order. Though they are somewhat large for the average Singapore home, I have seen them for sale here. Internationally, pheasants of all kinds are commercially bred in many countries, and chicks are frequently advertised by suppliers in the USA and Europe. The Silver and the Golden are two widely-traded species which are said to be easy for beginners to care for. The Silver Pheasant is said to be hardy, but aggressive. Perhaps it beats up other birds in a private aviary.” 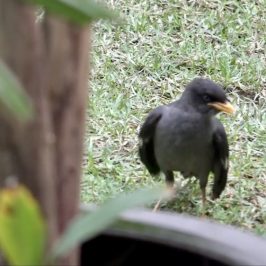 All chicks after fledging need to be taught by the adults on how to forage...

The adult Zebra Dove (Geopelia striata) flew off from my garden leaving the recently fledged...