Part 1 of the Christmas sunbird story can be found HERE and Part 2 HERE. “30th December: Peanut is one week old and still alive. She is a tough cookie with an incredible strong will to live. Today when I was watering the plants I noticed her in the nest with her beak full of white feathers (above). Was she eating the lining of her nest? She seemed to be choking, heavily shaking her little head. This was too much to bear for me. Having seen it starving over a period of fully seven days, and with the image of the other happy baby sunbird in my mind this was the moment I decided to give her a bit of human help. “With a tweezer I pulled out the feathers that were stuck deep in her throat. I had noticed that her hostage taker had not been much around at all today, but he came to take a brief look shortly after I helped her. Then he left the scene again leaving her by herself. “Seeing her with so much will to live, but still looking like a recently hatched nestling of two days old, all my instincts wanted to help. In this photo above you see she still has her eyes closed, very skinny and not even the tiniest pin feathers. She deserves better than this.

“I had found a good website discussing the dilemma on whether to leave the baby bird alone or not. They said ‘It is not a good idea or a bad idea. This is a philosophical question and the right answer depends on what kind of person you are. There is nothing wrong with letting Mother Nature solve her problems in her own way. The baby you just found wasn’t destined by Her to survive. Letting Nature take its course is fine in the grand scheme of things. In the United States, it is also politically correct. But if we all accept that on an individual daily basis, there would be no need for veterinarians, physicians or good Samaritans.” “Having read all about feeding baby insect eaters I decided to feed her, for the first time, this afternoon some bits of hard boiled egg (a tiny bit every 45 minutes-1 hour), which she was very eager to take a couple of times throughout the afternoon (above). Late afternoon, as every night, she crawled up to sleep … all alone deep into her nest. “31st December: Last day of the year. Peanut is 8 days old. This morning she was again trying to swallow some feathers. I noticed her hostage taker was in the area and we were speculating whether it was him who had given her the feathers or not. We are in the darkness about his motives and as a surrogate father/caretaker he is completely failing… Peanut is not developing, the maximum is that Blue-Beard (the Brown-throated Sunbird who had chased away the parents and taken over the nest) does is barely keeping her alive. “I removed the feathers from her throat (above) and because this time the hostage taker stayed around in her area, I have not yet fed Peanut … I think I should not feed the chick while Blue-Beard ‘looks after her’. Even if he is a bad caretaker, if he abandons her, there is no other bird in her life from whom she can learn being a bird.

“1st January 2017: The story does not have a happy end but I am happy the suffering has ended for Peanut and for me on the 9th day after she hatched from her egg and 7 days after she had been abandoned by her parents. Yesterday afternoon Peanut became more and more lethargic, and reacted only very weak to movements of her nest. “Just before sunset she crawled up really deep into the nest to sleep and did not wake up anymore. The tiny body that I removed from the nest this morning was about the size of a 10 Baht coin. No feathers, not developed beyond a baby sunbird of some 2-3 days old. RIP Peanut. You have demonstrated all the websites wrong and all the experts who say orphaned nestlings do not survive more than a few hours without food… She was a little Christmas miracle but we had to leave her behind in 2016… “I buried Peanut under the frangipani plant where her parents Olive and Sunny Boy (Olive-backed Sunbirds) had been sitting so often at the beginning of her short life. The nest remains fully intact on my terrace. I just noticed that her hostage taker (the Brown-throated Sunbird who chased away the parents) came around again, looking for her or the nest. If there are any further developments I will of course let you know… There may be a new story in the making…”

Note: Appreciate comments, explanations re the behavior of the Brown-throated Sunbird, etc. 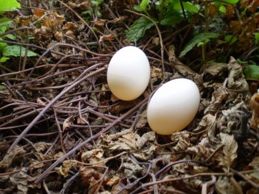 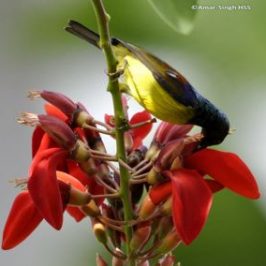