Part 1 of the Christmas sunbird story can be found HERE.

“We were very happy that the pair of Olive-backed Sunbird (Nectarinia jugularis) had added a baby bird to their family. But we were also anxious because the last few mornings the nest had been under attack by a male Brown-throated Sunbird (Anthreptes malacensis). Twice we were woken up by the frenzy of the panicking couple frantically chirping from a few meters away to chase the attacking bird away. The latter moved away only because I opened the bedroom window. “Olive (mother sunbird) had herself intimidated quite a few times by the newcomer on the scene (below), but she was as much as possible with the nest and her baby (above). “Above is our pirate, the Brown-throated Sunbird who I nicknamed Blue-Beard, who had been showing up incidentally the past two days, but who did not want to leave the area of the nest today. He is so much upsetting the young parents (who vocalise with loud chirps) and being slightly bigger and bolder he seemed to be taking over their territory. “Even though I think it is a questionable action, I resorted to a water gun to spray Blue-Beard every time he showed up today. Apart from a very temporarily effect it did not reduce his fascination with the nest (above). “Blue-Beard was spending more and more time near the nest (above) while the parental couple Olive and Sunny Boy were unsuccessful in fighting it off (above). Surprisingly Blue-Beard has yet to harm the baby (whom I nicknamed Peanut)… He was just there, in the area around the nest, coming and going to the nest and looking at it, and we do not understand why (he was not making any sound). Is he perhaps a widower missing his wife and wanting to have his own nest? “25th December: Peanut is two days old. You can just about see a bit of yellow beak behind the lower rim of the opening (above). Today Blue-Beard, the intruder dominated the scene completely and, sadly, we only sporadically saw Peanut’s parents Olive and Sunny Boy. They seemed to be giving up. I do hope that Peanut is not starving to death… “26th December: Peanut, the Olive-backed Sunbird chick, is now three days old and I am very worried of her survival. Parents Sunny Boy and Olive have not appeared anywhere near the nest or my terrace all day and seem to have abandoned the nest. The nest is perfectly intact and Peanut is still alive but… orphaned and not being fed… I think she must be dying… In the photo you see very vaguely the yellow rim of the beak inside the nest (above). “Blue-Beard, the territorial intruder is now permanently staying put near or in front of the nest (above). Not making any sound but just being nervously vigilant. I have not been able to find any account of this behaviour on internet… “27th December: Peanut is 4 days old. It looks as if she had another night alone. Totally amazing. Every time there is some breeze causing a movement of the nest there is the tiny mouth of Peanut showing over the rim (above). A sign of hope? It looks however as if she has not grown a bit. Agonizing. I am dead worried; have been looking up how to foster and feed an orphaned baby sunbird. It will need feeding every 15 minutes. Impossible. And how will we be able to teach it being a bird? It is heartbreaking… “This morning I saw Blue-Beard, the intruder, briefly with what looked like a female Brown-throated Sunbird. Was he showing off the nest to his partner? I did not see this female any further.

“Around midday, to my astonishment I saw him some 3 times very briefly with his head INSIDE the nest. Is he feeding the chick? Or checking the state of the chick? If he has actually adopted the chick, the feeding is only very sporadic and with lots of time in between. Also it does not look as if he is with the chick during the nighttime… Peanut’s parents have not shown up at all in the past two days. I totally miss them and am continuously listening carefully in the hope of picking up their chirps… but nothing… “29th December: No. So sorry. This is NOT Peanut. We saw this cute little Olive-backed Sunbird fledgling, perching in a tree near by our home, happily chirping and being fed by its father (above). It must be just a little bit older than Peanut but it is in a so much better condition that I felt heartbroken about the fate of Peanut. I had been looking at many websites on how to feed orphaned birds but am still in two minds about taking action… Back on my terrace, am pessimistic about Peanut. Her ‘hostage taker’ seems to be losing some of his fascination and interest in her and her nest. 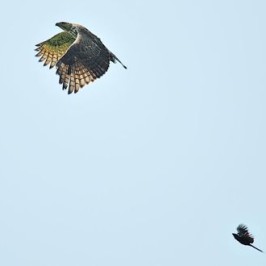