In January 2016, Aviculturist Lee Chiu San wrote on birds eating large cockroaches, based on aviculture and not observations from the wild as follows LINK:

“The feeding of cockroaches to aviary birds is something that should only be done by experienced bird keepers with a trusted source of uncontaminated supply. The average domestic cockroach has been in drains and has probably been sprayed with countless dozes of insecticide. It is definitely not something you want to feed to precious pets.

“However, in chicken farms, feed mills, and other places where food is prepared, insecticides cannot be used. In Singapore today, cockroaches are no longer allowed to exist in such places. But they can still be found in large numbers in feed mills in neighbouring countries. Some are sent to Singapore as a cheaper alternative to the crickets that fanciers feed to their birds. Knowledgeable aviculturalists never feed cockroaches directly to their birds from the supplier. The roaches are usually kept for a week or two and fattened on more nutritious food, especially fruits. The fruits have two effects. They provide the vitamin C and roughage that many insectivorous birds ingest indirectly through their prey. And fruits are purgative, so they hopefully empty contaminants out of the guts of the cockroaches before the insects themselves wind up inside the birds.”

Birds that eat such cockroaches include almost all the large insectivores and small carnivores and they include:

BESG has a collection of posts on wild birds eating the large American Cockroach (Periplaneta americana) (above). These include:

White-breasted Waterhen (Amaurornis phoenicurus) caught a small cockroach and offered it to its partner LINK.

Birds catching and eating forest cockroach (Pseudophoraspis nebulosa) (below) include:

Collared Kingfisher (Todiramphus chloris) that caught one and fed it to a chick LINK. 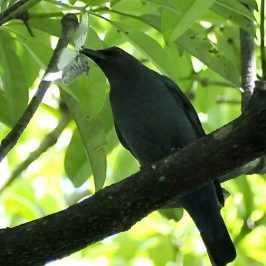 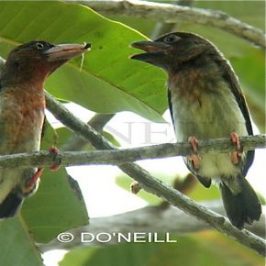 “Five days prior to photographing the record shot of a juvenile Malaysian Honeyguide (Indicator archipelagicus)...