CLARIFICATION: The mealworms were already there when Adrian Tan and friends arrived to photograph the pitta. There is absolutely no suggestion that Adrian was responsible for the mealworms. It was simply mentioned that the mealworms were courtesy of pitta enthusiasts – those who were there earlier. YC Wee, BESG The Hooded Pitta (Pitta sordida cucullata), a rare winter visitor and passage migrant, has arrived in Singapore (above). According to Wang & Hails (2007), it arrives as early as 2nd November and stays until 4th May, peaking around December. Some of the pittas remain here during the northern winter. Others refuel and continue their journey southwards to Sumatra and Java. This yearly southward migration is to avoid the cold winter of their breeding grounds in the north. This pitta sub-species is native to the Himalayas, SW China, Indochina, Myanmar and Thailand (Wang & Hails, 2007). It winters in the Malay Peninsular, Singapore, Sumatra and Java.

This is an attractive green bird with a black head and chestnut crown. It forages on the ground for insects and their larvae, and also eats berries. It breeds between February and August, the pair being strongly territorial and build their nest on the ground. For more information, visit this LINK.

“From what we know, pittas are not residents of Singapore, including the Hooded Pitta,” wrote Adrian Tan. “However, as part of its winter migration path, this little chap makes Singapore a pit-stop each year.” “Without fail, it draws crowds of excited local nature photographers and birdwatchers, who come out in throngs to catch a glimpse of its beautiful and striking colours, characteristic of the pittas,” added Adrian. “So after the afternoon rain today, I joined my friends Freddy Chew and Ric Seet and we were fortunate to squeeze off a few shots as the hungry bird came out from the bushes and hopped around, looking for an afternoon snack!”

And snacks there were aplenty, courtesy of earlier pitta enthusiasts. On a small mound within the Ginger Garden can be seen mealworms (see images above except topmost). Yes, this pitta was being lured by mealworms. 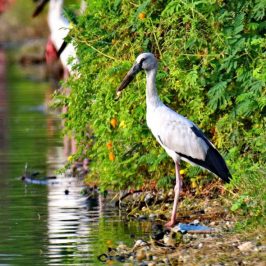 “Asian Openbills (Anastomus oscitans) have become common in recent at wetland sites and there is... 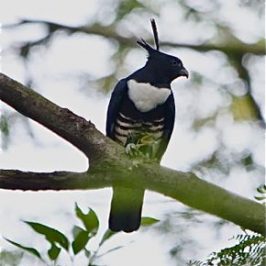