The Eared Pitta (Anthocincla phayrei) is an uncommon resident in Southeast Asia. Arne Wuensche documented a pair of adults feeding two chicks in the nest – the male seen in the image above and the female below. According to Erritzoe (2003), the nest is globular with a side entrance, loosely built with roots, leaves and grass on the ground (above). The female lays a clutch of four eggs. Both the male and the female fed the chicks with worms at the nest (above). In the video below, the female can be seen picking up the fecal sac from one of the chicks to be disposed some distance from the nest.

The second video below gives a close-up view of one of the two chicks in the nest having difficulty swallowing the long worms that were fed to it earlier. 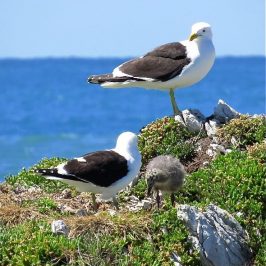