Thomas Liang photographed a Red-breasted Parakeet (Psittacula alexandri) perching on a flowering bunch of the African Tulip (Spathodea campanulata) at Kranji Marshes in September 2016 (above). The parakeet then ripped off a couple of flower buds and chewed on them (above). These buds are usually full of water. So is the parakeet after the water inside?

The video HERE shows an Alexandrine Parakeet (Psittacula eupatria) doing the same thing. It bites into the base of the bud, spilling liquid in the process, and no doubt consumes some of the ?sweetened liquid at the same time. Then it picks up another bud and repeats the process.

Wells (1999) has no information on food for this parakeet while Collar (1997) mentions nectar and flowers of various plants as well as seeds and fruits.

Children used to play with these buds, using them as “water pistols”. The bud tip is pinched off and the swollen base is squeezed to send a jet of water at your opponent. 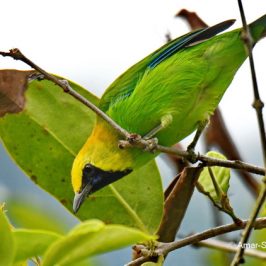