Part 1 of the series can be found HERE and Part 2 HERE.

“I made regular visitations to their breeding grounds; at times early before the morning frenzy hours of feeding their young began.

“It was observed breeding pair of Blue-winged Pittas (Pitta moluccensis) took own breakfast of mainly vermin during predawn hours.

“It took almost three days, after a flying parenting female was spotted with vermin – assumingly to feed chicks that eventually directed me into the area of vested interests.

“Being excellent decoy specialists- Hercules and Medusa, the parenting pair of Blue-winged Pitta would have me fooled by sending me to different locations, taking banana flights from variable foraging sites and dumping faecal sacs in others.

“Exiting after feeds from one spot could not be assumed nest was there. Parenting birds so aware of my presence, decoyed by hopping undercover to another spot, a metre or so away, before taking off. Such manoeuvres left me guessing. I had to admit they were so good, that I actually could not pin point the exact spot of nest, until two days prior to fledging their chicks.

Eventually ‘dust settled.’ Most of my observations were made alongside boundary of fruit orchard, behind which a corridor of mixed undergrowth forest buffers along a hill sloped, walking trail. “From this vantage point south-east facing, I had good views of the orchard and approaching parenting birds. I took cover amongst low shrubs in stool sitting position with DGscope and binoculars 8×32 (above). “I could also walk along the low ridge and execute a hand shot of the habitat surroundings such as this image (above), but no further to arouse the barking of three security dogs, chained to a makeshift hut, 24-7 duties in a rather neglected fruit orchard. “Arrangements were made with orchard owner-caretaker, the purpose of my visit in the vicinity area and for a limited time period and at own risks. It was observed all feeds provided by flight to nestlings were earthworms. They differed in sizes and in quantities (above).

“Despite taking precautions to remain as quiet and discreet possible, these sharp-eyed ground dwellers often spotted me. There was no way to stand on same level grounds with these vermin specialists, whose sharp hearing far exceeds the usage of a stethoscope.

“How these creatures are so well designed to sense, hear and feel movements of wrigglers underground is simply amazing. To be able to provide food sorties, in large quantities continuously from dawn to dusk, for 12 days to feed their young, is simply Herculeneous!

“Parenting pair when left at ease took to a routine of flying in with prey in their beaks. They took up favourite perches, made regular predatory checks- looked right, left and right- and when all clear, dived and disappeared into ground cover of fern species, along a gentle slope. “Here is male bird- Hercules showing front and side view (above, below). “During initial stages of monitoring, whenever my presence was detected, parenting birds sent out alarm calls. ‘Meals- on- wings’ either stayed put on their perch or took to hiding a further distant away and awaiting my leave. “Medusa, the female on the other hand was more apprehensive. There was no occasion she allowed herself to feed chicks in my presence – side view of female bird (above). “Here is angry female bird- Medusa with her food wriggly parcel and starry eyes that said it all, ‘I am watching ya… Go away!’ (above).

“Monitoring in tandem and in keeping to minimal feed interruptions, I soon learnt to graciously take a walk or have coffee breaks whenever Medusa showed up, less I be ….. ‘turned into stone’ as Greek mythology reads.

“My monitoring records showed, I allowed no more than 19minutes of waiting time period before parenting birds fed their young. “Feeding times varied with parenting birds showing up mostly at different intervals between 05-20 minutes apart from one another. At times, they flew in together. Sometimes, cold feet Medusa waited for Hercules. Photographic image of parenting pair with prey presented here (above). A synchronised Olympian pair of breeding Blue-winged Pittas with earthworms posted here (above). In case readers still wonder who is who, this parting, near sequential shot of Hercules, taking the plunge and leaving his feet behind, is what trick photography does to our eyes… (above).

“Join me in Part 4 series to fast backwards to read when it all began… and thereafter, a bit more and another surprising highlight in this monitoring series.” 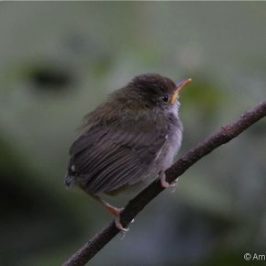