Jeremiah Loei’s video of the Sunda Scops-owl (Otus lempiji) family was documented in Mid-August 2016 at Lower Peirce Reservoir. The owls were roosting in a palm, perching on the back of a frond, one adult and two juveniles. “…they are very productive, with regular brood being spotted yearly,” wrote Jeremiah. Now why do smaller birds harass owls that are generally larger and can cause harm to the former? According to one theory, mobbing is instinct rooted in the Darwinian struggle for survival LINK. After all, mobbing is an anti-predator behavior. 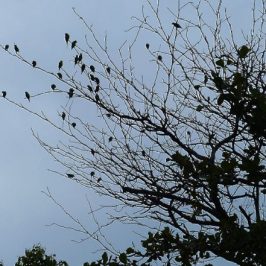 “I came across a flock of 40 to 50 Long-tailed Parakeet (Psittacula longicauda) on 3rd...

K.C. Tsang, an avid birder and photographer, was walking along a grassy area in Ponggol...