In August 2016 KC Tsang came across the endemic Swamp Forest Crab (Parathelphusa reticulata). This species, found only in Singapore, is confined to a single location in the Central Catchment Nature Reserve (CCNR). The conservation status of this crab is naturally deemed “endangered” (Ng & Wee, 1994). The reason? In land-scarce Singapore, legally protected nature reserves is no guarantee against expropriation for development, as seen when a large area of mature forest at Lower Peirce, also part of the CCNR was nearly turned into a golf course (Wee, 1992).

We were puzzled when we saw the scientific name of the crab listed as “Parathelphusa reticulata Ng 1990” in the second edition of the Singapore Red Data Book. Puzzle turned into delight when we realised that “Ng” refers to Prof Peter KL Ng, currently Director of the Lee Kong Chian Natural History Museum, National University of Singapore. So Peter is the first person to describe this new crab species and had it published in 1990. He is also the lead author of the first edition Singapore Red Data Book that declares its conservation status as “endangered”. When asked “Was there a eureka moment when he first encountered the new and as yet not described species, Peter replied “none” and “it was Kelvin’s fault” as the latter showed him a picture of the crab and he answered confidently that it was “Parathelphusa maculata with an odd colour.”

It was Kelvin’s stubbornness and refusal to concede to Peter’s arguments that the crab may vary in appearance from different locations or that the acidic water in the swamp forest may have caused the changes that led Peter to finally concede that the (arts) undergrad was right and the (biology) teacher was wrong.

According to Peter, “The scientist in him… got him to investigate further, as the “essence of science teaches that complacency is the first sin of enquiry.” Further investigations bore fruit that finally revealed that it was indeed a new and yet to be described species. “The discovery was a lesson in humility,” added Pater. “The opportunity for discovery is great, if we can see through our own blindfolds.”

Kelvin of course refers to Kelvin KP Lim. He was then an arts undergraduate and a nature enthusiast par excellence. And it was him who first documented Javan Mynas (Acridotheres javanicus) indulging in anting way back in 1988 – a behavior that stumped even experienced birdwatchers for the next 17 years. Kelvin eventually joined the staff of the then Raffles Museum of Biodiversity Research where he authored a number of Singapore Science Centre guide books on fishes, amphibians and reptiles. He is currently still with the museum, now renamed Lee Kong Chian Natural History Museum.

Incidentally, the biology of freshwater crabs is different from that of the marine species. Freshwater crabs bear large eggs that the female broods under her belly. Also, there are no free-swimming larvae as the large eggs hatch into miniature replicas of the adults. These miniature adults are guarded by the female during the crucial first few weeks before being released. Marine crabs on the other hand produce large number of free-swimming larvae in order to ensure survival against predation. 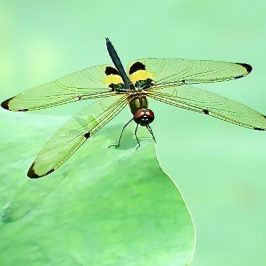