“I have encountered juveniles of the Scaly-breasted Munia (Lonchura punctulata) previously HERE. Attached are some images of Chestnut Munias (Lonchura atricapilla) including a juvenile and an immature that were taken recently. These confiding Chestnut Munias provided good opportunity for close photography. Except for the image of the immature that was taken at Gardens by the Bay, these images were taken at Pulau Punggol Barat. “An adult Chestnut Munia appeared conspicuous in the morning light with colours of its plumage contrasting sharply against a clear distant background. This adult was perched on stalks of grass, engrossed on eating its breakfast of purplish-looking Plush Grass (Chloris barbata) seeds. This bird was part of a small flock of five, which included an only juvenile (top, above, below). “The juvenile in this flock was at times begging to be fed. Unfortunately, did not have the luck to witness any actual feeding as these small birds were flitting frequently and at times hidden between the long grass and bushes. However, was able to capture this juvenile’s front and back views from close when it was momentarily out in the open. “A close-up view of the juvenile’s front (above-right) shows a distinct line: darker on its head and lighter down its breast. Comparing this line with the demarcation between black head and chestnut-brown body on the adult, it would appear that this juvenile is starting to transform its plumage into adult. Note the dark-coloured bill and pale oral flange of the juvenile. “An earlier encounter of an immature shows it with an adult that appeared to have its head flustered. Note the immature’s mixed plumage that consisted of irregular patches of juvenile and adult plumage. Also, note the bill colour of the immature and the absence of oral flange (above, below). 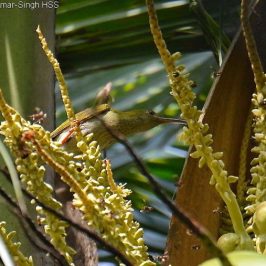 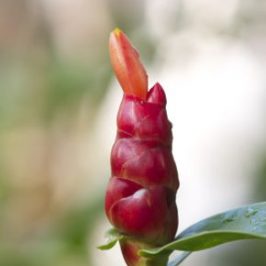