“In the past, I had numerous contributed articles written on various behaviours, sex differentiation, food preference, nest building and parenting of Blue-winged Pittas (Pitta Moluccensis).

“This year July 2016, a highly experienced and elusive breeding pair was observed finally executing flight sorties of vermin to a secret site and disposing faecal sacs to other undisclosed areas.

“Each passing day, I prayed and hoped my discreet visitations to their breeding grounds, the elusive breeding pair be endowed the opportunity to play their parenting role – feed and fledge their young. The chicks too, no idea how many there were, the chance to live another day – a day closer to D-day-fledging.

“Breeding season for Blue-winged Pittas usually falls between April and August. Should first clutch fails, sometimes it has been observed, the breeding pair would hastily proceed to re-nest.

“The finale came on the twelve day – 18July following those prior consecutive days of bird monitoring. The day before, heavy rains soaked all dryness and broke the dry spell. The rains too heralded the long awaited wet season – well timed the arrival of fledglings to learn and feed easier on fertile, vermin infested grounds of fruit orchards and its surroundings.

“Sensing chick fledging was close at hand, I visited the site as soon as morning rains abated. I was not disappointed. Patience, self-discipline and diligence paid off. The opportunity to witness the fledging process added a new milestone in observing the life and behaviours of Blue-winged Pittas and family. “Hercules –the male parent arrived with beakful of worms and took to a quick branch perch. A quick look around, aware of my presence but somewhat ignored, made a swift dive into the undergrowth (above). “I noticed some movements on decayed leaf litter, ground floor partially obstructed by lush carpet of fern species. Two chicks viewed from my spotting scope had just fledged and remained rather stoic while waiting to be fed (above).

“It was observed fledglings took from Dad their first outdoor meal. “Soon, chick No: 1- Doe was observed taking a low, abseiling flight like a spooked flying Buttonquail to slope land about 10metres further away at forest edge marked X (above). “Chick No: 2 – Ray with fleshier, jagged gape also took to first maiden flight and instinctively followed and joined Doe (above). “An interesting observation issued. Punky ‘hair-do’ Doe was seen picking from forest floor and fed to Ray. A nature instinct of caring by older sibling… perhaps (above)? “It was also observed Doe inched closer to huddle Ray and both patiently waited for meals to arrive by flight express at waiting area X (above, below). “Sibling chicks spotted parent’s arrival onto tree perch with food package of earthworms. Led by Doe, they flew hastily towards parent but lost steam and landed into ground cover of fern species at foot of an old rambutan (Nephelium lappaceum) tree marked X2. “Instead of feeding Doe and Ray, Hercules flew passed them and dived into nesting area. It appeared there would be more than two mouths to feed; as suspected when observed earlier, faecal sacs were still being disposed off that morning when I arrived.
I directed DGscope towards nesting site area and spotted chick No: 3- Me already waiting its turn at nesting site (above).

“The 3rd fledgling received a vermin portion from Dad (above).

“By a miraculous stroke of good luck, or fate would have it, Doe the naïve and innocent, flew into the open and took to a branch perch just about over a metre off ground- marked X3. Doe was just about 6metres from where I sat and fledgling provided five minutes of one opportunity in lifetime photography and video recordings. “Smart and hungry Doe having taken to a branch perch off the N. lappaceum tree was heard calling softly, ‘twe…twe…twe…’ (above).

“Do parents exercise fair play to their chicks?

“Do join me in next article to view some chick feeding images… another one time opportunity… only at BESG.” 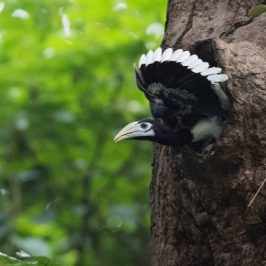