“The Common Redeye (Matapa aria) is a moderately rare butterfly, first observed in Singapore in 1998. It is a small butterfly (about 20mm wingspan) with a dull brown upper wings and ochreous buff lower wings and a distinctive pair of red eyes. The adult is crepuscular. “The above image shows the Common Redeye with its distinctive red eye. “An adult was first spotted at the Garden on 18th June 2016. On 26th June, six leaf-shelters were found and collected from a clump of Bambusa multiplex at the Garden. Two shelters were found to be empty and the other four had 1st and 2nd instar caterpillars less than 10mm. The above image shows the leaf shelter at tip of leaflet. “The 1st instar caterpillar was seen on 26th June (above) and the late 3rd instar on 3rd July (below). “The caterpillar lives and feeds inside its rolled up leaf shelter, constructed at the tip of a leaflet. The caterpillars were very fragile and were left alone inside their leaf-shelters. After moulting, they moved out to construct another shelter. “The late 4th instar was detected on 8th July (above). “On 16th July, we spotted the caterpillar moving to construct a shelter to pupate. “On 21st July we opened the shelter to reveal the pupa (above). We did this because the leaf shelter had dried and harden and our previous experiences with other species taught us that this will injure the imago during eclosion. “The fully formed imago became visible on 25th July (above). “The newly eclosed adult is shown above “The male Commn Redeye (above) shows the bands on the forewings.”

Note: All images and video by Janice Ang. 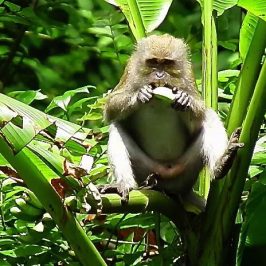