“I found the Eurasian Tree Sparrows (Passer montanus saturates) in Sandakan quite interesting in a number of aspects. They appeared to be wilder, but then Borneo as a whole has always struck me as ‘wilder’ place than the mainland. These sparrows are not native to Borneo but migrants. One of the first reports in the whole island is from Sandakan in 1964 (Davison 1999). Currently they are widespread in urban areas but still not matching the mainland population densities. “I spotted two nests near my hotel but both did not use man-made structures as is commonly seen in the mainland. In the mainland the commonest urban structure used is the eaves of roofs. Here I spotted one using a hole in a tree trunk where the branch had been lopped off (above, below). “The other was using the dense fibre or ‘husk’ at the leaf base of a Livistona chinensis (Chinese Fan Palm or Fountain Palm) (below). “Both nests were hidden from view.

“Summers-Smith (2016, Eurasian Tree Sparrow Passer montanus in Handbook of the Birds of the World Alive) states that ‘Nest built …. mostly in hole in tree, earth bank, cliff or artificial structure, sometimes in base of large nest of heron, crow or bird of prey; less frequently free-standing nest in tree, but then usually hidden in thick conifer or creepers.’ “I spotted a 3rd set of birds nesting in a semi-urban area, again possibly in a tree. One of the pair was carrying prey for young. Images were taken against the evening light but my observations suggested that this was a large ant or wasp (above).

3. Subspecies
“There has been some lack of agreement as to the actual subspecies of Eurasian Tree Sparrow in Borneo. That wonderful Borneo ornithologist Smythies states that for north Borneo they are P. m. saturates (1981); darker and more richly coloured with a larger bill. Certainly the sparrows I saw looked pretty to me, but they always do. “Some image of adults and juveniles to look at (above, below). “As the birds in the island could have come by ship from a variety of directions (Hong Kong, Japan, Peninsular Malaysia, etc.) they could be hybrids. They however do look better dressed than my local birds (richer tones). 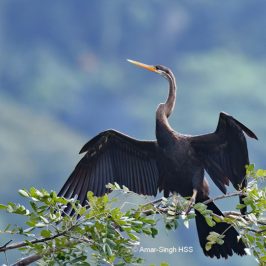 “I have intentionally kept the sighting dates and location of this bird vague as I...