In June 2015 I attached bags of red chillies (Capsicum annuum) from the rafters of my porch to discourage Common Fruit Bats from roosting. The exercise was a success and the chillies, now dried, have yet to be removed (below). For a few days in June 2016 I was attracted to the porch by the soft chattering of sunbirds. A pair of Olive-backed Sunbird (Nectarinia jugularis) was flying into the porch every now and then, attracted by the hanging bags of dried chillies (below). They spent a few minutes each time. Either the male or the female would fly in first, followed by the mate soon after. They would move from one bunch of bags (there are two) to the other, spending a few seconds on each before flying off.

Sometimes the pair appeared to be pecking on the bags. Were they feeding on something? Or were they checking on a potential nesting site? I suppose only time will tell… 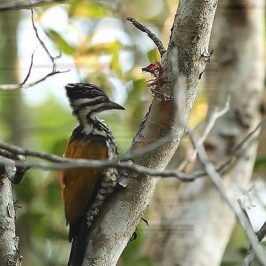