After my failure to video the eclosion of the Hummingbird Hawkmoth (Macroglossum sitiene) but success in documenting the adult moth probing for nectar from flowers of Wild Water Plum (Wrightia religiosa), see LINK, I managed to obtain another pupa from Foo Jit Leang (above).

Unfortunately I again failed to video the crucial moment the moth emerged from the pupa. This was despite my leaving the video on for nearly two days and one night in front of the pupa.

By then the pupa was black and I had given up hope, assuming that it was dead. But it was not dead. On the morning of the third day it eclosed – undocumented. I picked it up and placed it on a short branch to allow it to dry its wings (above). After a few hours of moving various parts, it eventually fell from its perch, vigorously fluttering its wings (below). Apparently it wings were damaged and it was not able to fly. Sadly it died soon after. No idea why. 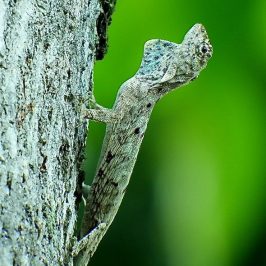 “Most of us would be familiar with the diurnal displays of male Flying Dragons (Draco...