“The Rain-forest Discovery Center at Sepilok, 45 minutes from Sandakan, Sabah, Malaysia is a great place to see many species of animals, not just birds. “This was my first encounter with a Slow Loris (Nycticebus menagensis). This particular strepsirrhine primate is native to the north/east region of Borneo, as well as the Sulu Archipelago. The name is not very appropriate as it is mainly found in Borneo. It is a small, shy creature weighing 250–300 grams, and has pale golden to red fur with lovely eye markings. It is arboreal, nocturnal, and occurs in low densities, making it difficult to locate.

“This particular animal was hidden in some bushes and, we suspect, had come out to find water in this extremely hot and dry spell where most of the stream had dried up. It looked so cute and cuddly but fortunately we did not touch it.

“The slow loris is one of the only poisonous mammals in the world. Quentin 2016 states “Both sexes of all loris species have a gland inside their elbow (brachial gland), which sweats a clear oil. Loris often lick the gland when under stress, then lick their young all over or rub the mixed saliva and oil over their heads. The oil in the gland contains venom that is activated when combined with saliva.”

“Other sources indicate that this venom causes severe allergic shock in humans, occasionally resulting in death. The poison has developed as a defense against both predation and attacks from rival Slow Loris during territorial breeding fights. It is good that such a fragile creature has a good defense against mankind and others animals.” 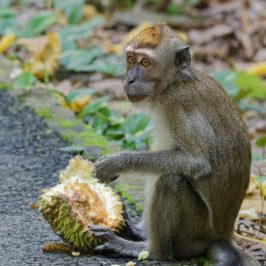 The spiky durian fruit is in season again.  While Homo sapiens residing in Singapore wait for... 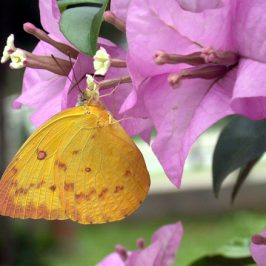