The Great Hornbill (Buceros bicornis) is a large, black and white bird with a distinct black band across the white tail. The white plumage is often stained yellow due to preen oil. The pair (top) was flying around the forest looking for fruits at Batang Kali-Genting Highlands, Malaysia. Only when they flew nearer and landed on some branches that Danaraj had the opportunity to photograph them. There were two pairs flying around the area most of the time. Apparently they were somewhat used to people and allowed limited close access for photography.

These hornbills usually feed from the canopy of large trees, sometimes descending to the ground to pick fallen fruits. Their presence can be detected by the heavy flapping of wings and their series of very loud “kok” made by a duetting pair that usually lead to harsh roaring and barking. 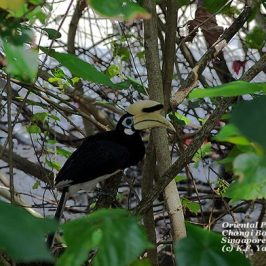