“Foo Jit Leang passed me a pupa of Hummingbird Hawkmoth (Macroglossum sitiene) on 13th March 2016. The next day he messaged me that the pupa would probably eclose on the evening of the next day. As luck would have it, the hawkmoth emerged from the pupa around 0400-0500 hours the next day “The eclosed moth sneaked out between the bars of the cage where it clung on to dry its wings. Placing it on a twig, it allowed me time for photography (above). When it was light, the hawkmoth was still on the branch. I set up the video hoping to catch it flapping its wings to strengthen them before flying off. It stayed still for about half an hour before it suddenly flew off (below).

“A few day later I was invited to the Seletar Country Club Butterfly Garden by Jit Leang where he “loaned” me a recently eclosed Hummingbird Hawkmoth that he was about to release.

“I brought the hawkmoth home in a plastic container where it was left until the next morning. It was then cautiously brought out of the container and placed on a twig of Wild Water Plum or sui-mui in Cantonese (Wrightia religiosa) to allow it to feed on the nectar of the flowers, as suggested by Jit Leang. I was ready for it to fly off immediately, although in the container it looked exhausted and lying on the base.

“It was transferred from my fingers to the twig where it immediately flapped its wings and flew around. It must have been hungry as it began hovering in front of the small flowers, probing them with its extra long proboscis. It spent a few minutes flying around the twig and feeding on the flowers. This allowed me to video the unexpected event – see above.

“It was an exciting moment for me to be able to capture it feeding on the flowers. The hawkmoth then flew off after its morning feed. Well, it was released after all, although not around the Seletar Butterfly Garden.” 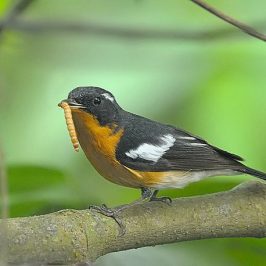 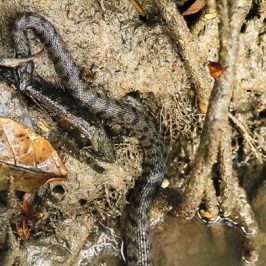 “Attached are pictures of a Dog-faced Water Snake (Cerberus rynchops) swallowing a fish. “I documented... 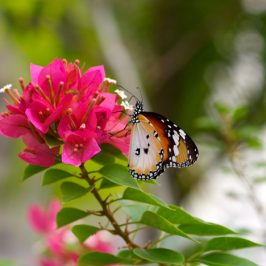 Another butterfly visits my Bougainvillea plant to sip nectar from the flowers. This time it...