“Insects are fascinating in their diversity and beauty. I saw this Feather Legged Moth half a kilometre from my home (above). It is a clearwing moth of the Sesiidae family and has the scientific name Macrotarsipus similis.

“Wikipedia and other on line sources quote it as being identified in Indonesia and Thailand and that its habitat consists of ‘dark tropical jungle’. So it was a bit surprising to find it just near my home in Ipoh in an urban environment. An on line search shows one image taken in Langkawi. Like birds, I wonder now about the migration capacity of insects. “What is interesting about this clearwing moth are the
‘black feather-like tarsi at its hind legs’. A closer look (above) shows that they are not pure black but have a metallic blue sheen to them.

“It would interest me if anyone has any idea as to the purpose of this adaptation to the hind legs. The structure obviously limits their use in terms of resting on vegetation. I wonder if there is any function in reproductions or mating rituals.

“The rest of the insect is also fascinating with clear wings, dark body with blue stripes and blue metallic antennae (quoted as ‘green-violet sheen’ in one article, see references).” 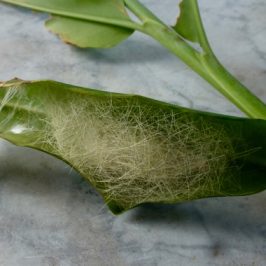 I have been growing kantan or torch ginger (Etlingera elatior) for many years now. I... 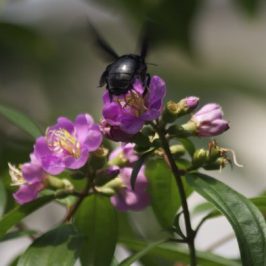 Singapore Rhododendron (Melastome malabathricum) is a weedy shrub with showy pinkish flowers. Details of the... 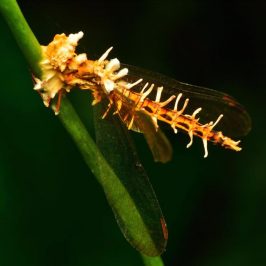 Johnny Wee had an exciting encounter at Venus Drive yesterday. In all his years as...