It was March 2014. Lee Li Er and husband Sam Wong were walking along Summit Path at the Bukit Timah Nature Reserve. All of a sudden there were loud calls of drongos as they flew through the lower tree canopy of the forest. Initially they thought the drongoe were mobbing a Colugo or Flying Lemur (Cynocephalus variegates). Then they noticed that the “Colugo” was perching on a branch and not hugging it. They soon realised that it was actually an owl, a Barred Eagle-owl (Bubo sumatranus) to be exact, that was the target of the drongoes (above). It was likely that the drongoes were protecting their active nest nearby.

Nocturnal owls roosting during the day try their best to remain as unobtrusive as possible. However, this Barred Eagle-owl was noticed and thus mobbed. The owl was hit a few times but there was no confirmation whether it was actually chased away.

Owls as well as raptors are regularly mobbed by other birds, usually much smaller than themselves. The attackers can suffer serious injuries should the victims fight back. But usually the latter simply move away.

This Barred Eagle-owl is an extremely rare non-breeding visitor to Singapore. In the 1920s it was a resident bird but subsequent large-scale deforestation slowly led to it disappearance from the scene. 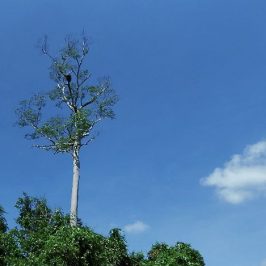