“It’s been a long time since I last wrote something for BESG. But thought I’d follow up on a previous article on Danaine butterflies scratching Crotalaria leaves for sap HERE.

“Previously, as featured in the article, I had videoed a Common Tiger (Danaus genutia genutia) cratching Crotalaria [Rattleweed (Crotalaria retusa)] leaves and imbibing the sap that oozed out:

“This evening I saw Common Tigers busy scratching Crotalaria flowers as well! Petals, sepals, leaves, everything was worth a scratch for a sip it seems:

“I noticed that these and other videos captured mostly males (with oval brands on the hindwings) feeding on the sap containing alkaloids. So upon some quick research online, I found out that, in addition to these butterflies imbibing the alkaloids to make themselves distasteful to predators as a defence mechanism (as mentioned in the previous article), males also feed on the alkaloids to produce pheromones to attract females.

“Notwithstanding that it was already 6.30pm and the sun was setting, at least 10 Common Tigers were still busying themselves around the Crotalaria patch in a flurry of orange wings. They were still feeding when I left close to 7.00pm, not sure if they will continue feeding into the night, but I had my own dinner to attend to.” 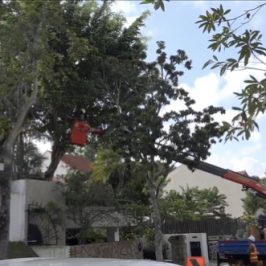