““On a warm midday at the beginning of the year, 22nd January 2015, we found an Black-naped Oriole (Oriolus chinensis) sprawled face down beneath a tree just across the road where we lived. The bird initially showed no sign of movement as we picked it up. It had fallen off its perch some minutes earlier. As we were aware that stray cats prowled the neighbourhood, we decided to bring the fledgling in and placed it in a make-shift cage lined with paper towels to provide it some comfort (above). At the same time, we left the cage door partially open, in a shaded part of the garden to allow its parent to reach it.

“Almost immediately, we witnessed an adult oriole fly into the garden and to feed the fledgling (as if it had watched the entire event from atop the branches in the foliage of the trees). From then on, the adult bird, presumably the parent, would arrive starting at about twenty-past seven in the morning with breakfast ready in its beak and at intervals of 25 minutes thereafter.

“Initially we observed that the diet were fruits like banana but as the days went by, the diet included dragonfly and moth. (Unfortunately we have no photos to show for this).

“We found some red palm fruit left uneaten near the cage and tried to pluck a few from a similar nearby tree to help out, but the parent bird would not use the human hand-plucked ones to feed its chick.

“The last feeding of the day would end at half-past six in the evening. The parent would then fly to a high perch such as a tree branch or telephone cable and watch over its precious chick until about seven in the evening before flying off to roost for the day.

“Sometimes, we observed another black-naped oriole come to feed the young chick. We noted that this was a different oriole from the parent due to a number of observations : This other oriole was rather clumsy at the feeding task, the fledgling in our cage would become quiet not seeming to recognise this oriole and the parent would fly down to peck at this clumsy oriole presumably because it brought the wrong diet to the fledgling in the cage. (Unfortunately, we have no photos on this either). “During their waking hours, both fledglings would quietly sit around the cage, though the second fledgling, named “No.2”, seemed more raring to go. The parent bird came to feed both the fledglings at the usual intervals, distributing meals fairly. “After five days of occasional flapping, the second fledgling decided it was ready to attempt another proper flight. Without much hesitation, it stood at the edge of the cage, leaped off and flew to a five-foot tall tree approximately ten meters away where it had a brief stop. In the next minute, it flew into the foliage, too high for us to worry about cats. “Meanwhile, the first fledgling, we’ll call it “No.1”, would try to fly but barely managed a downward arc. We were concerned and wondered if this fledgling had a defect with its wing. However, the parent would faithfully bring food to this fledgling without fail. “Two weeks soon passed and “No.1” only managed to make its maiden flights 20 meters out. Wherever it landed, its parent was ready to bring food to feed it. During these ‘practice’ sessions, this young bird would inevitably take its pit-stop at precarious places, near crows or cats. We even had an afternoon where three crows eyed it. At the time, its best flights were a mere 10 meter straight trajectory followed by a downward arc. My parents, feeling compassionate, would search for it and bring it back into the cage, hoping it would gain strength. (Above shows #1 at on a branch on 10th Feb 2015.)

“On a fateful Tuesday, on 17th February at six in the evening, we had gathered for an early dinner when we noticed there was no longer any chirping from the fledgling. Seeing that the cage was empty, we started searching around, concerned.

“However, my sister spotted the fledgling on an eight-foot tall tree, 20 meters out, sitting very quietly and still. Well-camouflaged among the leaves. Did it instinctively know the dangers of being out in the wild though it had been a chirping, flapping bird just two hours ago?

“Early the next morning, we spotted the fledgling still sitting at the same spot. Its parent was calling. Surprisingly, with a burst of energy on its part, it actually flew successfully upwards and into the canopy. We quietly cheered in our hearts for this oriole fledgling’s successful flight.

“One week later, its parent came back to the garden as usual, but this time only to collect coconut husks. Perhaps, its duty as a parent was almost done and it was time to build another nest for another generation of orioles?

“After six months, we began to see an oriole come down for the bananas we put out in our garden. It looked just like a usual adult black-naped oriole but with a “dirty” yellow plumage and occasionally making a baby-type sound, so we kept an eye out for more appearances. The last we saw, it flew around with a partner. “The above image was taken on November 2015, about 10 months after rescue. The oriole appeared in all aspects an adult but it still made ‘baby’ sounds.”

Marianne Tan
Petaling Jaya, Selangor.
(This is an eyewitness account by family) 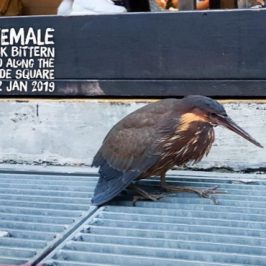