Amber Lau brought me a big fat caterpillar clinging on to a branch of Yellow Bells (Tecoma stans) that grows in her house fronting mine (above).

I was told that the caterpillar had eaten its full and was restless, wandering up and down the branch. The branch was left in a vase of water and placed on a table in my porch. That same night it crawled down to the ground and disappeared. I believed that it ended in the garden to pupate under litter or underground.

Learning of my predicament, Amber brought me another fat caterpillar a few days later. Apparently her two other caterpillars dug into the ground to pupate. So I placed the caterpillar on a pot of soil. It immediately burrowed down, disappearing from view within five minutes (see video below).

The soil surface was seen to be moving as the caterpillar constructed a small chamber just below the surface. Later, carefully removing the surface soil I was able to expose the yellow pupating caterpillar lying within the chamber.

With the top of the chamber exposed, I was able to photograph the pupa for the next 20 plus days until it eclosed (see video below).

The pupa wriggled at intervals, especially when disturbed. The video below shows the pupa at 20 days. When spraying a light mist of water to keep it moist, the pupa reacted vigorously.

Based on experience gained from breeding Atlas Moths (Attacus atlas) (below), I was convinced that the pupa would take 20-30 days to eclose. This was fortified by Amber’s pupae that eclosed just after 20 days, eluding her efforts to monitor the development. So she failed to catch the magical moment in addition to not seeing what type of a moth developed.

Learning from her experience, I caged the developing pupa throughout its development, being more vigilant once it reached 20 days. With a single pupa, the chance of recording the moment of eclosure is definitely slim. Regardless, I literally kept it close to my chest, keeping an eye at every moment possible. At night the pupa, lying on a layer of soil contained in the base of the cage was kept in my bedroom, minus the cage portion. The top was covered with a piece of cardboard – the better to video the moment should eclosure occur suddenly.

Day 20 and 21 came and went with no eclosion. Weariness took its toll and I became a little less enthusiastic. On the night of day 22, waking up at around 0300 hours the next morning, I removed the cardboard from the tray and looked for the pupa. It was not there. Obviously I missed the magical moment.

Convinced that the moth must be somewhere in the room I looked around and found it clinging along the edge of a chair as any recently eclosed moth or butterfly will do to the dry and harden their wings.

A few images were taken at that moment of excitement. Then thinking that the recently emerged moth would take some time for the wings to be flight worthy, I transferred it to a branch and brought it outside to have a proper photographic session. Unfortunately before I could set up the tripod, it flew off into the night. After all, it is a nocturnal creature.

So in the excitement of the early hours of the morning, I missed my chance to have better photographs or even sharing with other moth enthusiasts the opportunity to photograph this rare moth. Hopefully I am not being accused of intentionally releasing the moth. Yes, it is relative rare species, being a Death’s Head Hawk Moth (*) (above) as subsequent identification revealed (Barlow, 1982). The name comes from the presence of an image of a human skull on the thorax. During the short period of excitement, I did hear some squeaks but failed to pay attention until I later read that this moth squeaks like a mouse. Another species is supposed to raid bee-hive for the honey.

*According to Dr Leong Tzi Ming, it should be Acherontia styx medusa. 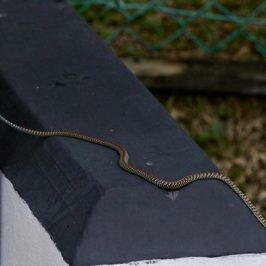 “Our good webmaster has a new reptilian visitor to his home. I too have had...