Dr Jean Ho sent in two short videos taken with her iPhone in her urban garden.

The first is her documentation of bird vocalisation in her garden after rain. The haze had temporarily subsided and the sound of urban birds filled the air (see below) – but not as dramatic as a dawn chorus.

But then the usual dawn chorus had since been silenced by the haze from Indonesia.

Her other video clip is about a Plantain Squirrel (Callosciurus notatus) scaring off a sunbird in her garden. This is a study of interrelationship between two different species, a mammal and a bird (below).

An earlier post showed a Plantain Squirrel being chased by a Yellow-vented Bulbul (Pycnonotus goiavier). It is possible that the bulbul was in breeding mode, thus its aggressiveness.

We encourage our citizen scientists to submit any observations on bird behavior, however modest they may be. As our knowledge of local bird behaviour is still growing, there are many aspects that need to be recorded. So you citizen scientists out in the field, armed either with a camera or a pair of binoculars, keep on sending what you observed. Nothing is unimportant in this field. 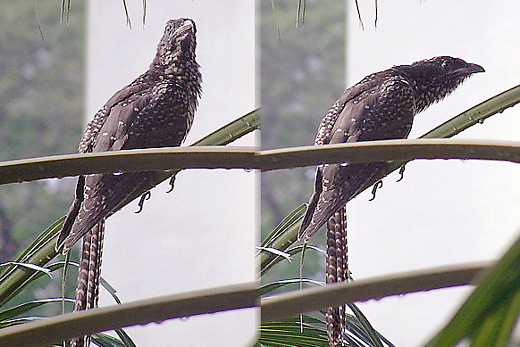