Jeremiah Loei’s Oriental Pied Hornbill (Anthracoceros albirostris) footage of a male feeding a female sealed inside the nesting cavity (below) was documented in Changi Village in early 2013s. It then systematically regurgitated one by one more than 15 figs it collected earlier and stored inside its crop to the female inside the nest. These were passed through the narrow slit that allowed for such a purpose. After the figs, a crushed bird was regurgitated and also passed on to the female.

The male then flew off and out of the opening came projectiles of excrements. Considering the amount of excrement ejected, not to mention the amount of food delivered, it was possible that there were chicks inside.

The male then returned with a snail. It took a few attempts before the snail was successfully passed on to the female inside the nest. 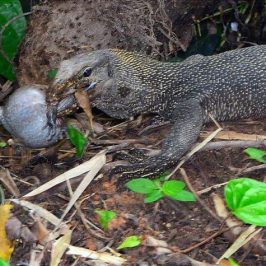