On the morning of 27th September 2015 I work up at 0630 hours hoping to enjoy the cacophony of birdcalls that herald the coming of dawn. I was disappointed. The chorus started late – 15 minutes to be exact. By then it was light. And the chorus was subdued. There were only isolated calls, lasting for the next half an hour. What the chorus lacked was the usual rich gurgling calls of the Yellow-vented Bulbuls (Pycnonotus goiavier) (see below).

The prevailing haze was the reason of this subdued chorus. For the last week or more, Singapore’s air was blanketed with the haze, blown in from Indonesian. There, farmers and plantation owners had been taking advantage of the prolonged dry weather to clear their land for planting or replanting of oil palms. The thick smoke caused heavy pollution in parts of Indonesia. Thanks to strong winds, the smoke was exported to nearby Peninsular Malaysia and Singapore, covering many areas with a thick haze (below). On this particular morning the haze was considered moderate as the PSI or Pollution Standards Index was below 100. Earlier the index was sometimes as high as 300, a very unhealthy level.

The above video of the dawn chorus was recorded from the same location during a period when there was no haze.

YC Wee & Jeremy Loei
Singapore
October 2015
(Note: The image of a hazy part of Singapore is courtesy of Jeremiah Loei) 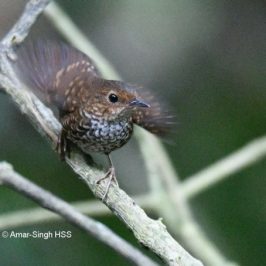