Around March 2014 sgbeachbum spotted an unusual ‘S’ curve on the water beside a tree through some vegetation at the Sungei Buloh Wetland Reserve. It looked a bit rough. A closer look through the lens confirmed it to be a snake… most likely a Mangrove Pit Viper (aka shore pit viper, Cryptelytrops purpureomaculatus) (above). It soon started moving and then I saw its head.

This was definitely a pit viper. It must have got caught by the fast rising tide on a low branch and had to take to the water to get to higher wood. It kept swimming to various stems in the water but did not get a snake-hold on any of them. After some time on the water surface, it managed to slither up the bark of a small tree. As it moved further up, a small stem with leaves slightly below it moved as well. I did not think that the movement was caused by the snake as it was a rather small snake (about 35 cm long) and was unlikely to cause such movement.

Looking down, I saw an elongated dark log just below the snake. It had not been there before when the snake had started moving up. I then noticed that the dark log had teeth… very sharp teeth. It was quickly obvious that the snake’s swimming on the water surface around the tree had caused a perceptible disturbance that alerted the nearby Saltwater Crocodile (Crocodylus porosus) to investigate (below). The croc eyed the viper for a few seconds before opening its mouth targeting the snake. I had initially assumed that the croc had succeeded in ending the viper’s earth-time as I could not see any trace of the viper after the croc targeted it. The croc moved away to a nearby rut along the waterline.

I wondered if the viper could inflict a bite on the croc. The Mangrove Pit Viper is a highly venomous snake after all. 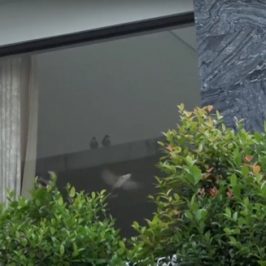 Just before dusk, the Red-whiskered Bulbul (Pycnonotus jocosus) gather at their roosting site where they...