“Encountered this one-legged Olive-winged Bulbul (Pycnonotus plumosus) recently (above). Did not notice anything unusual about this bulbul in the field when it was seen feeding on figs. It was only later when browsing through the images that I realised its missing left leg. The stump remaining at the tarsus was at times used to balance part of its body weight. There are times that the stump was seen dangling below the perch when the bird’s body was sitting on the perch (below). “On a return visit, it was seen with another adult and two juveniles. Although there was no direct interaction between the one-legged bulbul and the other birds, the close proximity to each other without any discomfort was probably sufficient to link them to be one family unit. “The two juveniles were at times perched together. The one-legged bulbul was also seen on the same branch with one of the juveniles (above). The other adult bulbul was actively foraging for figs that had turned purplish colour to feed the juveniles. Sorry, no photos to show the feeding as the episodes were brief and blocked from view. “Image to show the other adult looking inquisitively at some weaver ants that had gathered at a clump of leaves (above) and another to show it holding onto a ripened fig in its bill (below) are attached. “Also attached a close-up image of a juvenile showing its brown-coloured eye compared to the red eye of the adults (below). “The one-legged Olive-winged Bulbul showed its resilience to not only survive but to be able to raise its own family.” 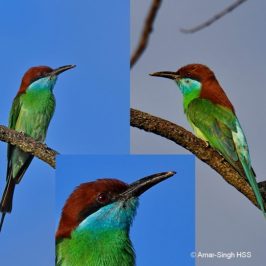 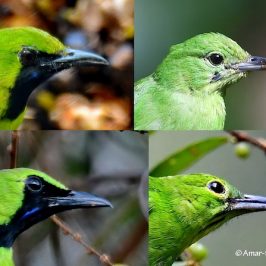