One evening I was surprised to see a Plantain Squirrel, also known as Red-bellied Squirrel (Callosciurus notatus), hanging on to the huge flowering bunch of one of my banana plants. It was apparently after the flower nectar. Taken by surprise, it scampered off. So I lost the opportunity to have a photographic record. The plant was in its last phase of flowering, so there were no further visits by the squirrel.

I had to wait more than a month for another banana plant to flower. As it was seen in the evening in the previous encounter, I maintained observations only in the evenings. I was taken by surprise a second time when one morning I saw the squirrel on the banana bunch.

So I set up my camcorder in front of the banana plant in the morning hoping to catch the squirrel feeding on the flower nectar. Only on the second morning did I see success – see below. Note that the background music to the video is “Squirrel Chitterin-PE80070” courtesy of The Hollywood Edge.

Earlier posts documented the Cave Nectar Bat (Eonycteris spelaea) and Spotted House Geckos (Gekko monarchs), besides bees and ants. Now I have added the Plantain Squirrel to the list of animals visiting the banana flowers. 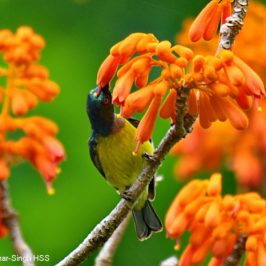 “The Sterculia colorata (Scarlet Sterculia or Bonfire Tree) originates from the forests of the Western...