“Mature males of the Scarlet Skimmer (Orthetrum testaceum, family Libellulidae) can be especially eye-catching as they bask on a brilliant sunny day (above). “Females of the species pale in comparison and are dull olive brown instead (above). “Though less commonly seen than the male, receptive females will reveal themselves at water bodies (above), in order to seek attention from conspecific males. “On the 28th February 2015, I was delighted to find that a female had been ‘swept off her feet’ by a male (above) and they had adopted the mating embrace posture while perched beside a water-filled earthen pot. The couple remained intimately engaged for just over a minute, with noticeable abdominal pulsations.

“A video clip of the dragonflies mating may be previewed here:

“Upon disengaging, the female began to oviposit at the water surface along the inner margin of the earthen pot, with the male hovering over her. A video clip of this behaviour may be previewed here:” 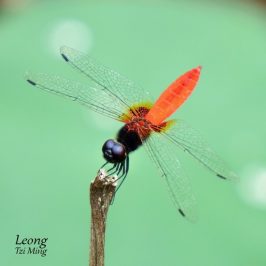 “While passing by local ponds, you must have previously spotted a red dragonfly or two,...