“A solitary Great Egret (Ardea alba) strolling in lodging property in Sepilok appeared to have found home away from home in July 2015. It was observed to be strolling at ease, foraging and digging up what looked like an earthen clump of soil embedded with wriggly vermin partially exposed (below). “This was confirmed when bird shook off loose soil and a photographic shot showed the last remnant of vermin in bird’s bill (below). “It was unusual to encounter a breeding visitor at this time of year. Initially mistaken the bird’s blackish bill tipped to be an Intermediate Egret (Mesophoyx intermedia) at quick glance, the dagger long gape-line with kinky, long neck convinced me the bird to be an Ardea alba and perhaps with soiled bill tip… (below). “Upon closer examination of my images, the presence of black- stained bill tip, feather filament plumes on bird’s back suggested the Egret was entering into a breeding phase whereby, the bill eventually would turn totally black during adult, full breeding stage (below).

“Similarly, the bird’s feet would turn pinkish-red. For now it appears all black (below). “It was also observed the Great Egret was making attempts or perhaps practicing with nesting material using hornbill feather. A behaviour which suggested the inclination to breed was close at hand (below). “A special mention of this bird is made for documentation.

“It is known in Borneo to be a common non-breeding visitor. Also, perhaps rare resident with only confirmed breeding records in E. Kalimantan (Reference: A Field Guide to the Birds of Borneo- Susan Myers). 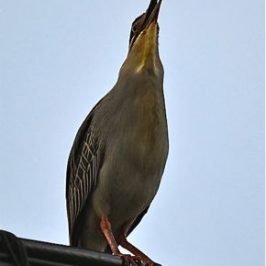