“While exploring forest edge on the 23rd November 2014, I spotted a mature male Long-tailed Macaque (Macaca fascicularis) perched comfortably atop a banana plant. To my surprise, it was expressing interest in the combs of green and clearly unripe fruit. With considerable effort, he wrenched and wrestled to break away the bananas and began peeling away the stubborn skin with his teeth (above).

“The thick green skin was systematically removed to reveal the stiff, starchy and sticky flesh underneath. With a hint of hesitation but hunger in his eyes, the macaque consumed the presumably unpalatable plantain without much complaint. “After this alpha male had his fill, his ‘throne’ was soon replaced by a female, which had been waiting patiently in the shadows. Similarly, she struggled to pluck each banana and strip away the tough exterior (above).

“A video clip of how the male demolishes an unripe banana may be previewed here:

“The resourcefulness of this species is certainly a key contributing factor to its successful survival in Singapore and the region.” 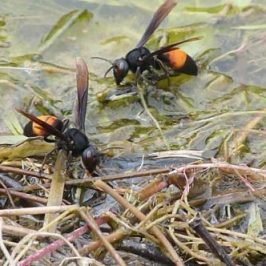