“From Wikipedia, anting is a self-nointing behaviour during which birds rub insects, usually ants, on their feathers and skin. The bird may pick up the insects in their bill and rub them on the body, or the bird may lie in an area of high density of the insects and perform dust bathing-like movements. The insects secrete liquids containing chemicals such as formic acid, which can act as an insecticide, miticide, fungicide, or bactericide. Thus, anting is way of reducing feather-parasites such as mites, or controlling growth of fungi or bacteria. “Attached are some images of a Javan Myna (Acridotheres javanicus) using a millipede for its anting. The first image shows this myna with its nictitating membranne closed and a millipede in its bill (top). The second image is a crop of the first image to zoom in for a closer look at the weaver ants on the ground in front of the bird (above). One ant could be seen on its body near its left leg. “The myna was seen in a contorted position and rubbing the millipede on its body (above). It dropped the millipede a few times after quick rubs were applied to its feathers. The myna appeared hesitant to pick up the millipede (below) and stared at it for a while … “…before picking it up to repeat the anting behavior (below). I suspect that the millipede was dropped deliberately. It could be due to the unpleasant taste of the millipede. “While I did not notice while out in the field, there was another Javan Myna that was probably also anting with a millipede. “The last image shows this myna with another millipede in its bill in the out of focus background (above). The myna in focus (holding an ant in its bill) was the one doing the anting described earlier. As for the fate of the millipede, it was not eaten. It was neglected on the ground after the myna was done.” 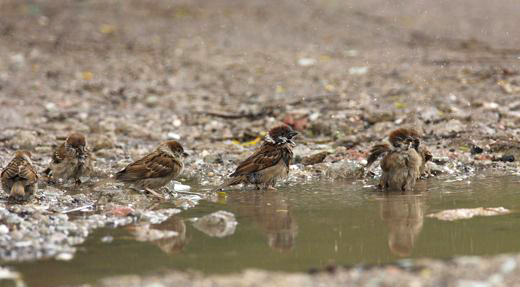 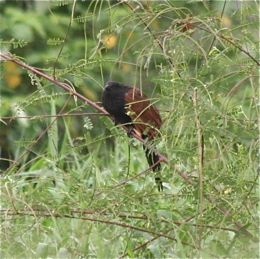