More than a decade ago I was introduced to an Oriental Whip Snake (Ahaetulla prasina) in my garden (above). This is a slender green snake whose pupil is horizontally elongated. I knew that it was not dangerous, although it was mildly venomous. Not sure what happened to it… probably crawled into the neighbour’s garden.

My next encounter was in January 2015. It was not a snake but its skin – a beautiful piece discarded by a snake that grew too big for its skin (above). Yes, when a snake increases in size, its skin will not stretch to accommodate the larger body. The snake has to rub its head against a rough surface to cause a break in the old skin. It would then slowly crawl out of the old skin, leaving it turned inside out… The fact that the skin was inside out stumped me until Dr Leong Tzi Ming helped identify it as that of the beautiful Paradise Tree Snake (Chrysopelea paradisi). This snake, also mildly venomous, is commonly encountered in most habitats from forests to urban gardens. It proved too elusive for me and I have yet to see it in my garden. So the image above comes courtesy of Johnny Wee.

The third snake was noticed four months later by my helper Estela. It had lodged itself behind some loose tiles by the garden drain. Only parts of its long body was seen (below).

In an effort to urge it out so that I could take a proper photograph, it suddenly emerged and gave up its prey, a Spotted House Gecko (Gekko monarchus) and went behind the tiles again (below). Tze Ming identified this snake as the House Wolf Snake (Lycodon capucinus) that lives around humans and feeds mainly on geckos. It will bite when provoked but not known to be venomous. The gecko was barely alive and when our backs were turned, a opportunistic Javan Myna (Acridotheres javanicus) picked it up and ran off. 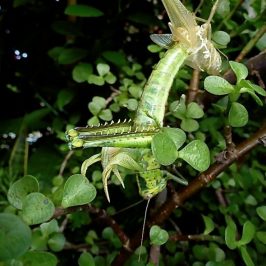