So far, all attempts at discouraging Common Fruit Bats (Cynopterus brachyotis) from roosting in my porch failed. I tried spotlights and hung CDs LINK 1 and LINK 2 but without success.

One outcome of the search was the opportunity to study various behavioural traits of these bats from grooming LINK to feeding LINK to courtship LINK and mating LINK.

One bonus was when I came across the alpha male one early morning licking the varnished wooden strips, using the site as a sort of “salt lick” LINK. Thanks to Johnny Wee who suggested the idea of a bag of red chillies (Capsicum annuum), I have now found a solution to discourage bats from roosting in my porch.

The video clip below shows arriving Common Fruit Bats flying in on the evening of 27th April 2015 during the hours of 1930-2030 to immediately fly out one by one. The clean floor of the porch in the morning testifies to the absence of roosting bats during the night. So far it has been about 2.5 months and the floor has remained clean every morning. 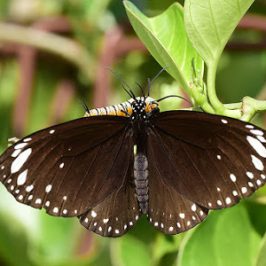