Chan Yoke Meng is among a small group of bird photographers and birdwatchers (who use cameras to document birds), to pay attention to the common species of birds. As long as a bird is doing something, he will keep an eye on it in the hope of documenting some behavior or other. He is the opposite of the “twitching” genre who are only interested in stationary, uncommon birds to capture near-perfect images or to add a tick to his/her checklist. Meng’s latest image (above) shows the common Asian Glossy Starling (Aplonis panayensis) that caught a garden snail. The starling was bashing the snail against the side of a tombstone to smash its shell. Once the shell was out of the way, the starling gobbled up the meaty flesh.

The last time we posted a starling eating a snail was about ten years ago Link, again, proof that common birds are generally ignored.

We have posted many accounts of birds eating snail. Although snails are protected by the shell, those birds that have found a way to break the shell are rewarded with the fleshy meat inside – see review HERE. 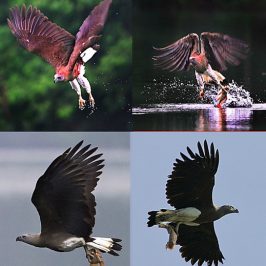 There are two genera of specialist fish eating eagles – Haliaeetus and Ichthyophaga. They live...