“I was passing by the Eco-Lake at the Botanic Gardens this afternoon at about 2 pm. The lake seems to have filled up nicely after the drought earlier this year, and given recent heavy rains, the lake-bed is densely covered by aquatic plants (Alteranthera sp., Micrathemum sp., Rotala sp. etc).

“The Lesser Whistling-ducks (Dendrocygna javanica) that frequent this lake, and are popular with visitors who photograph and feed them, were not seen though, but based on past experience, they tend to retreat to quiet, sheltered banks during the hottest hours of the day.

“A White-throated Kingfisher (Halcyon smyrnensis) was hunting quietly (without the triumphal call of the Collared Kingfisher (Todiramphus chloris) and an adult White-bellied Sea-eagle (Haliaeetus leucogaster) circled above. The resident black swans, now three, were at the far (western) end of the lake. “The most activity came from numerous dragonflies (above): Rhyothemis phyllis, Orthetrum sabina, Crocothemis servilia, Pseudagrion microcephalum, Urothemis signata (some in copula) and a good handful of patrolling Anax guttatus, which circled the lake’s perimeter, often gliding for considerable stretches, and bothered the smaller odonates. “On the lawn by the lake’s eastern bank was a family of Eurasian Tree-sparrow (Passer montanus), feeding on the ground (above). One immature individual had a curiously crooked leg, though, but otherwise seemed unhindered (below). “There was also a family of three Oriental Magpie-robins (Copsychus saularis), with the male singing prominently on a low branch and tolerating close approach (below). What seemed to be a newly fully-fledged individual then took the opportunity to bathe in a shallow strip of water between the bank and some marsh vegetation (below). “The other two did not join in, with the male continuing his singing and the female? – hopping about the lawn.” 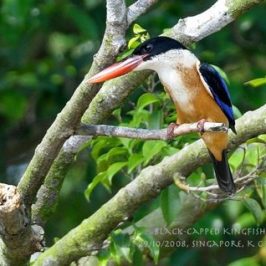 The Black-capped Kingfisher (Halcyon pileata) was among a number of winter visitors sighted in October...