“I was engrossed, watching the Baya Weavers nectar feeding, when abruptly a Banded Bay Cuckoo (Cacomantis sonneratii sonneratii) flew into the tree overhead (above, below). In retrospect I realised it was following a pair of Common Ioras (Aegithina tiphia) that had been making their way past me. “It was just a few meters overhead but fearless of me, so intent was it on finding the Iora’s nest. I observed it searching all the branches in the tree I was under and it then moved to the adjacent one, where the Iora nest was situated. Immediately the Ioras (especially the female) sprang into action and confronted it with loud calls and chased it back in my direction.

“I was slow in recording calls but managed these scolding Iora calls as well as an unusual ‘response’ call which I think is from the cuckoo (note that I did not see the cuckoo make these calls but at this point the birds were on either side of me, so sound directions were not confused). “Appreciate any experience or opinion regarding these calls HERE. The odd call is after the Iora’s call. Above shows sonogram and waveforms of the calls.

“At this point a female Crimson Sunbird (Aethopyga siparaja) entered the foray and ‘attacked’ the Cuckoo. It then chased the Cuckoo right across a field and over an ex-mining pool for quite some distance. It was rather comical and heartening to see such a small bird give chase to a larger one. I have seen similar bird cooperation in the past between Pied Fantails, Yellow-vented Bulbuls, Black-naped Orioles, Pied Triller and even a small Scarlet-backed Flowerpecker against a parasitic Asian Koel.

“Check out these links: HERE and HERE.” 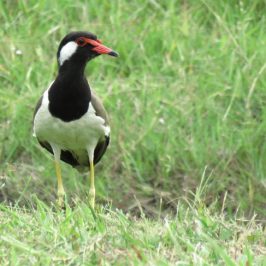