Following our early post on the juvenile Common Fruit Bat (Cynopterus brachyotis) that fell from its roost and our appeal for information of how to care for it LINK, Dr Vilma D’Rozario of Cicada Tree Eco-place LINK wrote that “…it is very tough to care for a young bat without its mum. But mum couldn’t have picked it up either [if the young is left on the ground],” Vilma put us in contact with Andrew Tay who responded with the following:

“…Looking at its size and body form, it is already a young adult and most likely was just weaned from its mother. And it seems that it didn’t successfully become independent and couldn’t find enough food by itself, then was starving and finally became too weak and fell off its perch.

“Fruit bats are much easier to cater for as compared to insect-eating bats which are smaller and require tiny insect food eg. mosquitoes and moths.

“I always keep a can of glucose in my fridge specifically for lost, weak or injured wildlife that I encounter, for birds, bats and other mammals.

“I mix a bit of the glucose powder with a few drops of water and feed this to revive them first and hopefully this will give them enough energy to then eat more solid foodstuff.

“For fruit bats, you can also mix a tiny bit of the powder to mashed up ripe banana and feed this paste. If the bat is too weak to open its mouth to eat, smear some on its lips and it should lick it off.

“The main objective is to perk it up immediately as small animals lose their body warmth and energy levels very fast.

“If a lively, still active baby bat is found, then yes, the first option is to hang it up where it was found or where you think it fell from to see if its mother will respond to its cries to retrieve it (but of course this has to only be at night when mom is active). But make sure that the hanging spot has a base that it can fall safely onto so it does not injure itself in case it falls again.

“Do be careful when handling wildlife as when they are frightened, they will bite to defend themselves. If you need to handle them then use a towel…

“Bats are so important to us and our environment–they eat up mosquitoes, grow forests by spreading seeds – we need them!”

Andrew further added:
“Mommy bat can only retrieve baby if baby is hanging from an exposed branch or perch that is not too near the ground as they don’t like to fly too low. But not if baby is on the ground as they then will not be able to fly upwards, unlike a bird that can use its legs to spring up into the air to gain height and flap off. Colugo and flying squirrel are also like that.

“Fruit bats need to fly and hang onto a perch and then drop into the air to flap away, while insect-eating bats, like swiftlets, have weak clawed feet to cling only to a vertical surface and cannot perch on or hang from branches.

“The last time I picked up a Dusky Fruit Bat (Penthetor lucasi) was along Changi Village Road. It had one wing fully wound up in fishing line. I took it to vet who amputated that wing. I named it named Battyboo. After a month with me in a cage it gave birth to a baby, named Babyboo.

“As baby grew it demanded more of its mom’s time. Unfortunately mom wasn’t in peak shape. She finally got too over-stretched and died. Baby wasn’t fully weaned yet although had been eating fruits. She died a week after mom.

“My lesson from that is to know when to separate mom from baby since in a cage she can’t escape its constant needs. Also, baby needs more time to rehab to become independent. Kept both for four month.” 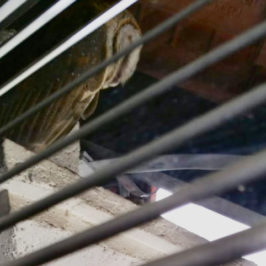 I was recently informed by Prof. Tan Teck Koon that the eaves of his house...