Painted Jezebel (Delias hyparete metarete) caterpillars feed close together on leaves of their food plant for about 20 days (above). During this period they undergo five instars to grow to about 35mm x 4mm. The caterpillars then prepare to pupate. In an effort to observe the caterpillars and the subsequent pupae, the branches of the Malayan Mistletoe (Dendrophthoe pentandra) where the caterpillars were located were cut and placed in a vase of water (above).

There, the fourth instar caterpillars underwent their last moult. And within a day or so the newly moulted caterpillars became restless (see video above). They moved rapidly up and down the branches. Reaching the ends, many raised the front half of the body and swirled it around, trying to make contact with nearby leaves or twigs in order to move forward. Unable to move further, they turned back and moved downwards. It was a sight to see them all moving about for hours on end. Some moved away from the vase to land on the ground.

This is a typical pre-pupation phenomenon. Were the branch still attached to the plant, these caterpillars would have moved a long distance away, each in a different direction to pupate. It would then be difficult to locate them. This is obviously a survival strategy, to pupate away from the feeding site and at different locations. With further twisting of the lower end, the emerging pupa eventually pushed the discarded skin off the leaf (above shows the head capsule still attached to the leaf). Out of 26 caterpillars, 13 pupa were located. Of these, two were found under the table. The rest cannot be found. The change from caterpillar to pupa occurred more or less one after another within a period of less than an hour.

The newly emerged pupa continued to wriggle about for some time before settling down – see video below.

The next phase of the Painted Jezebel’s life cycle begins with the pupa preparing for eclosion. 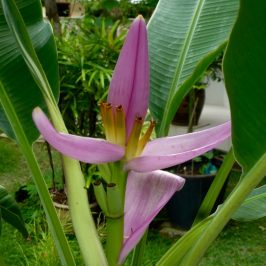