Mice appear to be the major diet of the pair of Black-shouldered Kites (Elanus caeruleus) nesting in Tuas. The adult kites were regularly seen hunting mice from their favourite perch. From a high point a kite would patiently wait until a prey was spotted. It then dived down to disappear into the undergrowth for a short time. It would then appear, flying back to its original perch or to the nest. This was done in the early morning or at dusk. As with raptors, the prey was caught with the sharp talons that most probably killed the victim instantly. The above image shows the kite flying off with a dead mouse. At other times the kite would decapitate the mouse while still on the ground before flying off (below). If the prey was for the adult’s consumption, it would be brought back to its perch. The head, if still present, would be ripped off. The entrails would similarly be removed. The flesh would then be torn off and swallowed until only bones were left. Any bits and pieces of flesh still attached to these bones would be picked off and eaten. The skin and tail of the mice would be swallowed (above). One day both adults caught a mouse each. After removing the head, they flew back to their respective perch to rest. One adult then flew off with the prey, possibly to feed the chicks. The other adult remained and fed on the mouse (above, below). 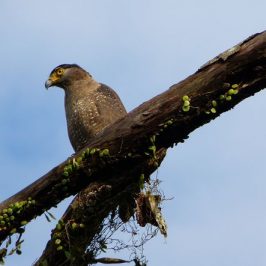