Of the pellets collected from an avenue at Tuas earlier by Melinda Chan LINK, one was prominently larger than the others (70x40mm) (above). It was also darker and more compact. Preparation of the pellet for harvesting of bone fragments followed the earlier protocol LINK. The presence of a skull with the characteristic positioning of the incisors and molars, with a wide space in between (above), confirms that the bones belong to that of a rodent, most probably a mice as the molars have cusps LINK

The next question is which species of birds regurgitated this pellet?

A pair of Black-shouldered Kites (Elanus caeruleus) was nesting in one of the trees along the avenue. Also, Common Barn Owl (Tyto alba) and Buffy Fish-owl (Ketupa ketupu) were sighted in the area. All three prey on rodents as well as cast pellets.

Owls swallow mice whole but the Black-shouldered Kite usually tears up its prey and swallows the parts. Field ornithologist Wang Luan Keng has this to say: “There seems to be no literature describing how it eats its prey too. Some literature describes Black-shouldered Kite sometimes eating small prey while on the wing, which could only mean that it swallows small prey whole. Having said that, I have seen many times Brahminy Kites grabbing some prey item from the ground, tearing and eating bits of it while on the wing, instead of swallowing whole prey.” Of the two owls, the Common Barn Owl is a possible candidate (above). Its pellet is highly compressed and not as soft as the others found in the same area. According to Konig (2008) the ”pellets are blackish with a silky gloss caused by a film of saliva.” Long (1998) similarly states that the pellet is dark in colour, adding that it is smooth, cylindrical and rounded both ends. Our pellet was not fresh but it was darker than the others found in the same loation. And it was large, 70mm long, as claimed in the literature 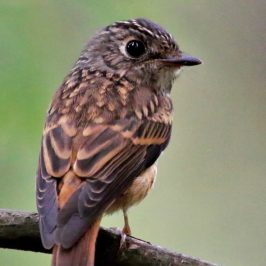 “The Ferruginous Flycatcher (Muscicapa ferruginea), is an uncommon winter visitor to Singapore. Highly sought after...