“The Octopus Stinkhorn Fungus a.k.a. Devil’s claws and Witches’ claws (Anthurus archeri formerly Clathrus archeri) is endemic to Australia and New Zealand. It has however spread to Europe and America since the first World War, possibly due to the spores riding on artillery machinery and grass bales for horse feeds.

“We came across this population of stinkhorns when we thought that we were taking a closer look at some fallen flowers. On approaching them, a light foetid smell reminiscent of the Rafflesia flowers from the Malesian region was detectable. Then the unruptured eggs and black, slimy spore masses on the fungus told us that we had chanced upon stinkhorns.

“The video captures this population of stink horn at a few different stages of development. We noticed the number of arms varied and the terminal split along each arm varied in length as well. The photos and videos we have seen on the internet shows the arms of equal length throughout.

“This video was compiled from videos taken at the Domain, Auckland, NZ in October 2014. The ground was shaded and covered with wood chip mulch.” 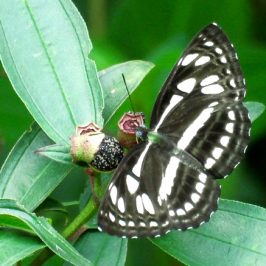