“We all have birds that become our ’favourites’, and I have many, but I am partial to robins and thrushes. I was looking forwards to meet this wonderful bush-robin and had a number of opportunities over three days at the Dasyueshan National Forest. It is also known as the Johnstone’s Robin, the Taiwan Bush-robin (Tarsiger johnstoniae), and due to common presence at ‘Mount Ali’, the Alishan Robin. The Avifauna of Taiwan, 2nd edition states that the “habitat in the breeding season is 2,600 to 3,550m ASL and … in the non-breeding season occurs at an altitude of 1,650 to 2,820m of broadleaf and coniferous forests, broad mixed forest…” “It is not that easy a bird to see, as it tends to keep to the undergrowth, occasionally coming out to the clearings or road side (images taken though mist). Usually a single male or female. The males have a lovely, rich red breast band extending to the back and mantel. This creates a striking contrast to the black head and neck and long white supercilium. In goo dlight, parts of the neck, mantel and tail have a bluish-slate appearance not mentioned in guides. “A highly territorial bird, both the male and female. Will posture in response to presence or calls of another Collared Bush-robin. Posturing includes fanning the tail, cocking the tail, raising both wings and tail in a flurry. The calls I heard were not those of spring breeding but more territorial. The come in a run of 2-4 and sound more like grunts; a very peculiar noise. If I had not seen the bird make it myself with Richard Foster pointing it out, I would not have believed it possible of a bird.

“An edited audio recording of some of these calls HEREwith an accompanying sonogram and waveform of calls (below). 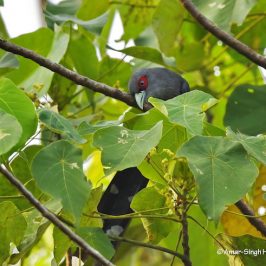 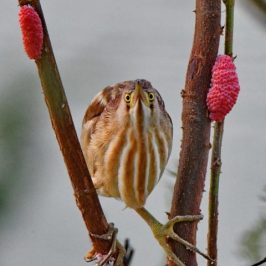 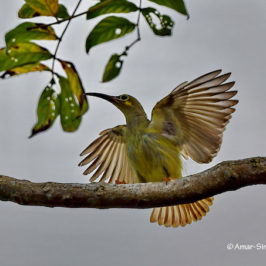 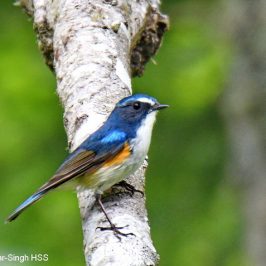